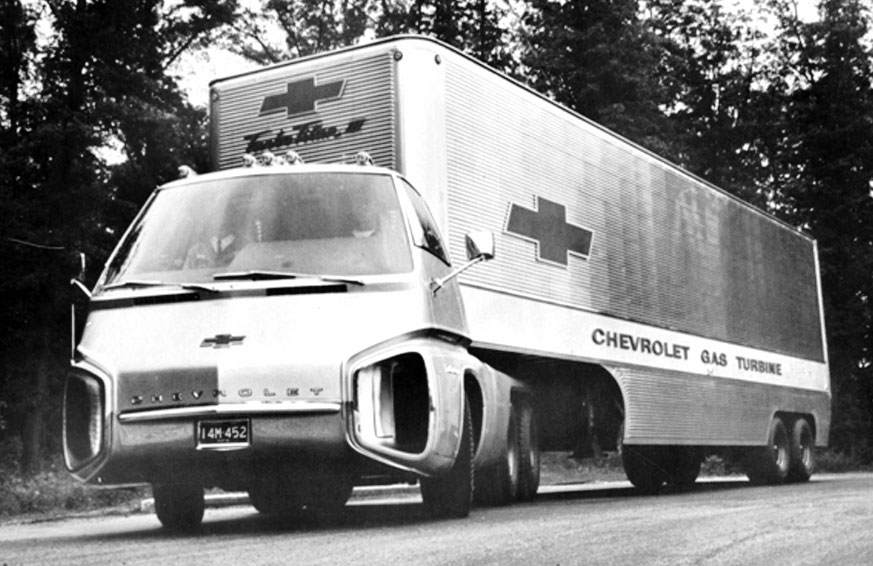 The early ’60s produced a period of unique and optimistic automotive engineering. Rival powerplants were engaged in another horsepower race, gasoline remained cheap, and automakers were relatively free from governmental regulation.

In 1966, Chevrolet announced its Turbo-Titan III, an operational prototype combining advanced truck styling with novel features, including major design improvements within its fifth generation gas turbine engine. Installed on an existing production truck chassis, and including a specially produced 40-foot stainless trailer, the entire platform had a 50-foot overall length and an operating gross combination weight of 76,800 pounds.

The GT-309 turbine engine was based on more than 15 years of continued development. Its operating heritage included units used in the experimental Firebirds, the Turbo-Cruiser bus, two Chevrolet Turbo-Titan production truck platforms, and 15 operational Allison Prototypes. 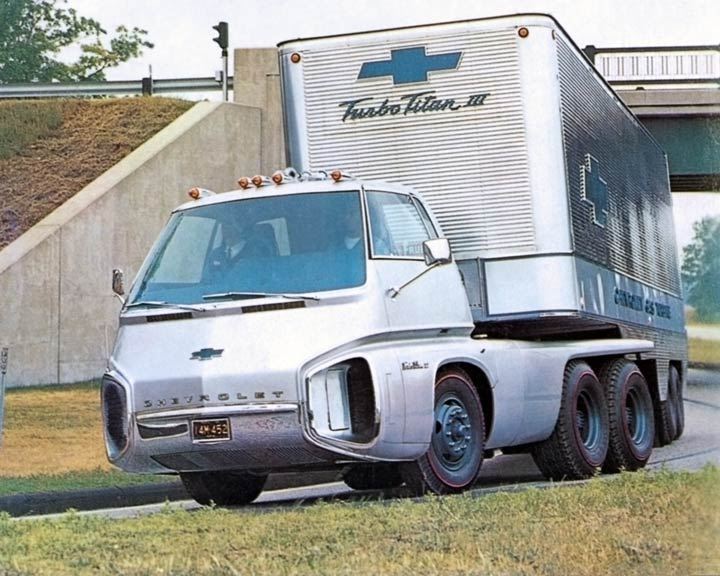 The GT-309 produced 280 hp with an upper shaft speed of 4,000 rpm, reduction geared downward from 35,000 rpm. Because turbine engines deliver their highest torque levels at stall, the 309 developed a maximum torque rating of 875 lb-ft at idle.

The 309 used the uniform basic internal components as its cousins, including a compressor, a gasifier, a power turbine, and a regenerator. The gasifier was mounted on the same shaft as the compressor. The power turbine gear was connected to the output shaft. A conventional Allison automatic transmission was coupled to the 309 with a special aluminum adapter.

The Turbo-Titan III used a pearlescent white fiberglass and steel cab combo with its styling theme extended to the chassis, which was completely concealed by molded fiberglass panels. Doors mounted just ahead of the rear wheels on both sides of the skirt provided access to dual batteries and the turbine engine when the cab was electrically tilted.

Power-operated wing-type side windows with top hinges provided operator entry when the key was inserted in the door. Retractable square headlamps were mounted within functional air intakes in two banks of three lamps each. The front turn signals were retractable, with the rears operating in sequence, flashing inward. 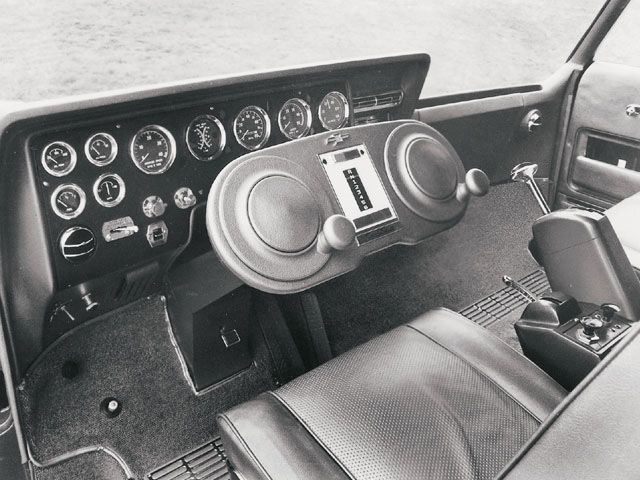 A flat exhaust stack exited through the roof. Inside, “Astronaut Seats” with full headrests were mounted on each side of a center console. A wing-topped handle controlling the six-speed automatic transmission was mounted on the console. A four-speaker FM stereo radio and a two-way telephone were used for the first time. The most novel feature, though, was the GM designed and engineered “dial steering system.”

This unit was mounted on a pedestal in front of the driver, replacing the conventional steering column and wheel. Twin dials mounted on a padded vinyl panel operated the platforms power steering. An auxiliary pump driven from the propeller shaft provided emergency usage if the main pump failed for any reason when the platform was in motion. The automatic transmission quadrant was also mounted on this panel, along with the turn signals. The pedestal pivoted forward and back along with the panel for the most comfortable driving position.

Many other manufacturers also considered these engines the power of the future, and several, including Ford, White, International, and Chrysler had fleets of turbine-powered vehicles on the road. Finally, the consensus was that turbines were excellent engines, but not for automotive use. 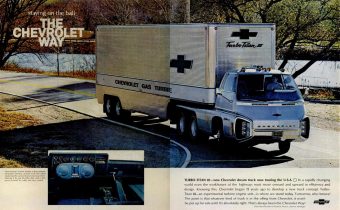 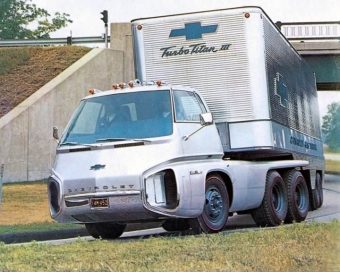 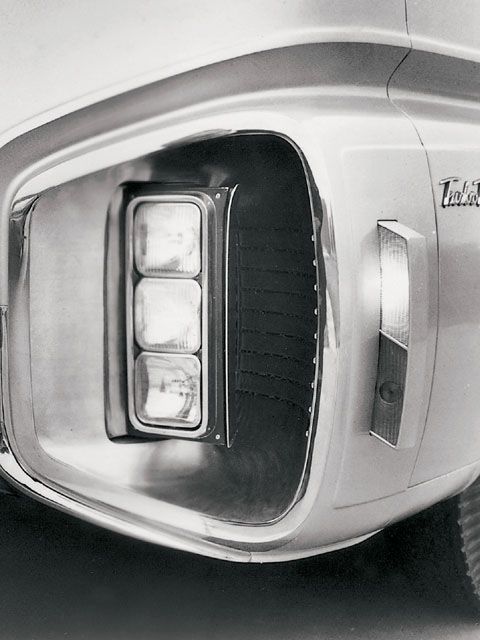 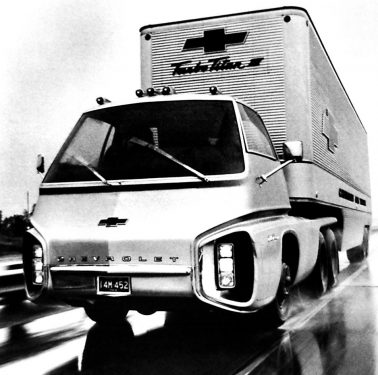 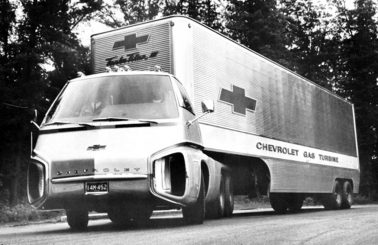 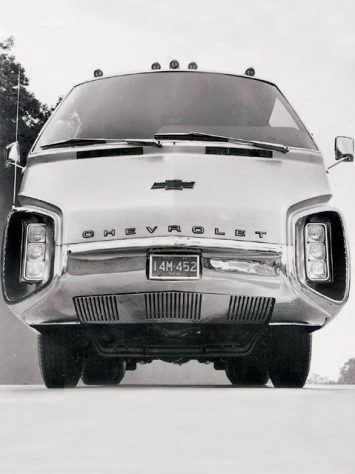 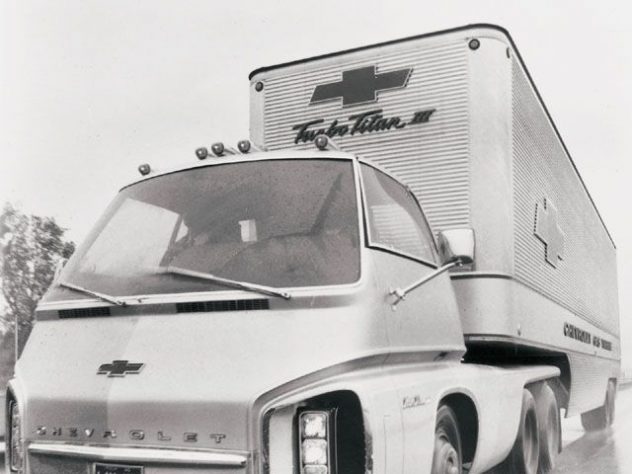