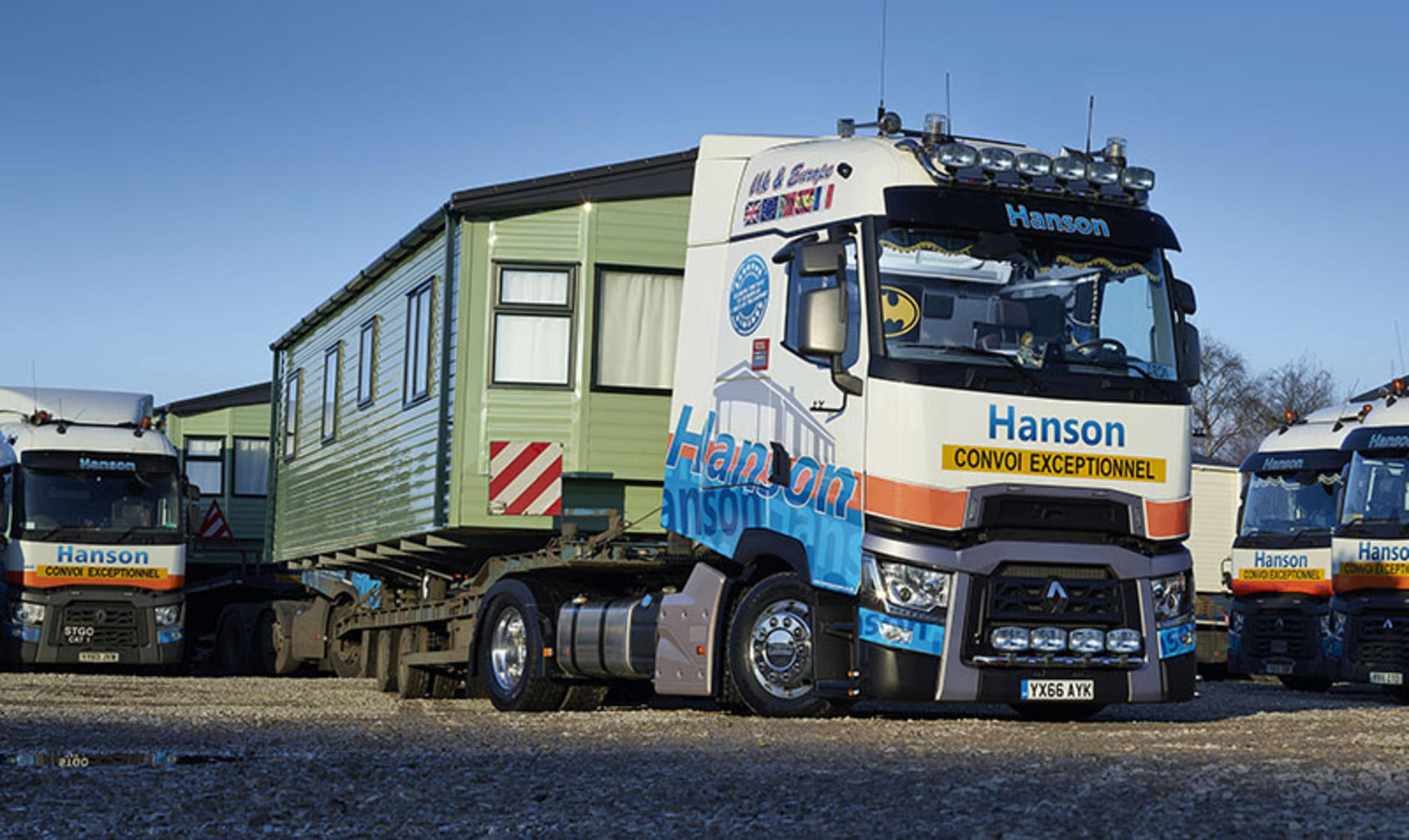 “We’re on the corridor in and out of the factories; that’s really why we moved here,” Gary Hanson tells us as we look out across the company’s new 2.3-acre site, recently acquired to replace two smaller yards. Hanson is now the nation’s largest static transporter, so location was key. “Probably 90% of the country’s static parc will come past us at some point on the nearby M62,” he remarks.

Currently the leisure business is booming. Manufacturers and holiday parks have seen record numbers of new caravans registered as more people look closer to home for their holiday requirements.

“When times are good, people buy caravans, when times are bad they rent them. The latter tend to keep their statics for a maximum of five years so it’s an ongoing replacement programme,” Gary explains.

Gary, Paul and Dawn Hanson share the day-to-day running of the company, started in 2010, although this is Gary’s second start-up. “I had a spell as an ownerdriver from 1999 until 2009 but this is really a numbers game. You’re never going to make much more than a living with one truck,” he admits. So, after a year out, the married couple joined up with Paul to launch the company they have today. “At the start we had the idea of more buying and selling than transporting but sometimes you have to just go in the direction customers dictate,” Paul says.

The truck fleet has grown steadily since 2010, at first sourcing from used dealers and auctions, whereas these days everything is bought new. An early association with Renault Trucks dealer Thompson Commercials has blossomed, and the Hanson fleet is 100% Renault. “The best part of the relationship is probably the dealer itself. Thompson tend to be really good at keeping their staff so, much the same as ourselves, you’re always dealing with the same people. It’s all new trucks with R&M,” says Gary.

“We’re now running a fleet of 31; 11 rigids and 20 artics. On the rigid side we started out with Premiums and newer Range Ds, but have now moved over to the larger Range Ts. “All of the trucks are occupied by a double-man team and the extra living space benefits both driver and second man,” adds Gary.

There’s a slight reduction in body length with the Range T rigid (down from 32ft to 31ft), but Hanson thinks it’s a price worth paying for the much bigger cab. Chassis have changed with evolution too, with the older 4x2s replaced by higher-capacity 6x2s, albeit with one exception: in January of this year Hanson took delivery of its first flat-floor, left-hand-drive Range T 440. The 4×2 flagship rides on full air with polished alloy wheels, the manufacturer’s high level Comfort trim and some top and bottom light bars to finish it all off. 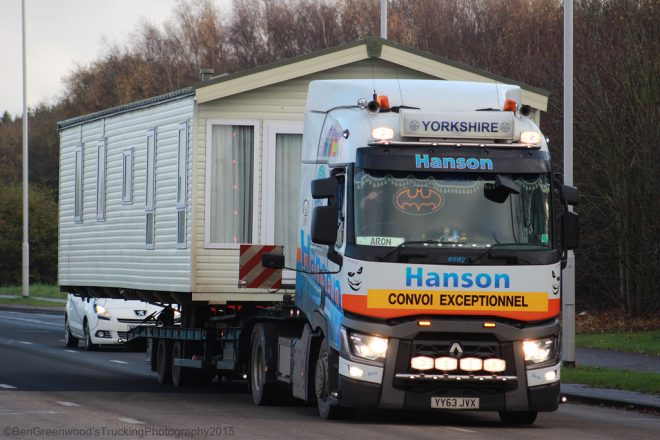 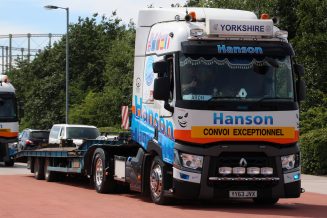 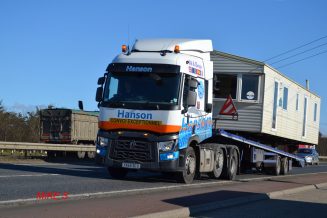 Gary and Paul both agree that fleet replacement plans are currently openended, especially given the fact there is minimal strain on the chassis and driveline. “We’re not really pulling any weight. Our maximum payload is around nine tonnes but the average is probably down at around five tonnes,” Gary concedes. Dimensions vary as much as the weight – from 38ft x 13ft up to 49ft x 16 ft. Heights can be variable too, although Hanson says growth in recent years has seen a size increase. So much so that some of the larger statics are split into two sections. So there are no 15.5m trailers planned?

“No,” Gary says unequivocally, going on to explain that almost all sites and holiday parks are in rural areas with restricted enough access as it is. “We have four extending trailers capable of a 60ft reach. That gives us the flexibility to do the odd long mobile home while not putting too many eggs in one basket.”

Larger caravans mean more planning, such as site surveys. The two-man truck crews can call on one of seven pilot vans for help, especially handy when scouting ahead for potential access issues is called for. And the value of these homes from home? A basic static will set you back around £12,000 but at the much larger luxury end you could be writing a cheque for up to £180,000!

If you’ve a CAT D11 bulldozer on the back of your low-loader and you hit a tree branch, we all know which would come off worse. Clip a tree with a static caravan and it’s a different story. “If you’re moving around 300 caravans a week, you are going to hit the odd overhanging obstruction,” Gary acknowledges. “But we have a quality procedure in place to deal with issues instantly,” Dawn adds. 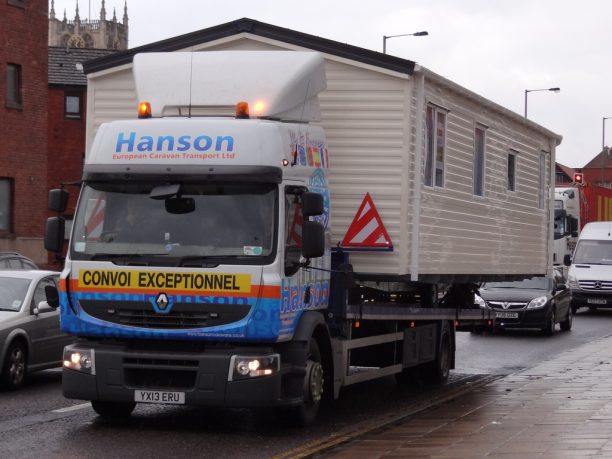 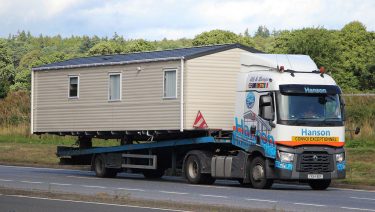 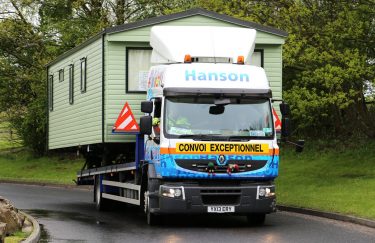 High winds are also a hazard for the light load-carrying boys. The driver makes the decision as to whether to stop or continue in high winds. “We don’t make 20 drivers park up in adverse weather or make them press on to make deadlines. They are the people out on the roads so we leave them to make the call,” says Gary. Staff turnover here is pleasantly low. Dawn reports daily phone calls from young people looking for a job as a second man, which is the firm’s one and only route for fresh, inexperienced potential employees (it has a ‘no under 25s’ policy). They progress to escort driver and then to the truck.

“Training second men is proving to be a good thing for all of us,” she says. “It schools people, from spending lots of time with an experienced driver through to passing their car test and working on one of the pilot vans, then on to full C+E licences.” If more mature drivers join without caravan transport experience they get six weeks on-the-job training with David Cadwallader, one of the most experienced guys in the company. “The industry is actually quite small so we kind of know most of the drivers on other firms too. The vast majority of those we have now have started and stayed,” the three agree.

As you would probably expect from a boss with an owner-driver background, the health and welfare of his drivers is a subject close to the heart.

“All truck drivers need some kind of a health plan. Far too many are eating sub-standard food in garages and MSAs,” says Gary.

Loading a large static is probably more physically demanding than you might think. To see how it’s done, we watch driver Stephen Blanchard and second man Martin Bateman load a sizeable static for a site down in Cornwall. It takes exactly half-an-hour to load, although Stephen stresses they could do it in 20 minutes flat if T&D’s pesky snapper hadn’t been present! 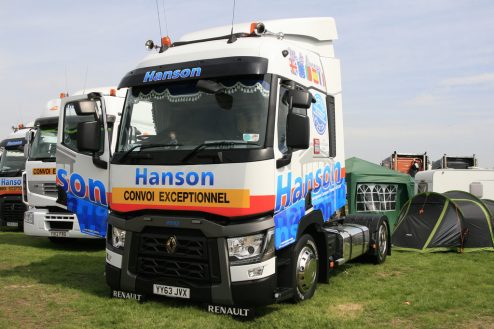 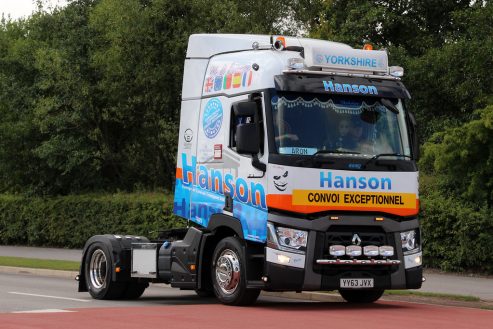 Despite it stating ‘International’ on the door, probably 2% of Hanson’s current traffic goes outside of the UK, although Gary remains positive this figure could change. “Brexit could prove really interesting for us. Britain is now becoming more and more competitive due to the value of the pound. This could really push exports as foreign competition gets more and more expensive.”

Portugal is probably the furthest destination, with backloads a rarity or avoided altogether.

“We might do the odd recovery for The Camping and Caravanning Club.” Finally, how do the trio view further expansion? “We have the capacity to increase the fleet to 42. We’ve gone from one truck to 31 in a relatively short space of time so I guess anything’s possible.”