Chevrolet G-7129 was the low silhouette prototype of Chevrolet’s 1.5-ton all-wheel drive truck. It achieved its lowness by simply moving the driver’s position from above the frame rails and placing it outside the frame behind the left front wheel. The radiator was then widened and lowered, allowing the engine hood to be only 2 inch higher than the fenders. This nearly conventional configuration resulted in a vehicle with an overall length of more than 18 feet sitting on a 137-inch wheelbase.

The height of the Chevrolet with all bows and canvas in place was 99 inches, but this could be reduced to only 67 inches at the top of the steering wheel by removing all top assemblies and folding the windshield. The extra long fuel tank was slung under the left side of the body, and held 60 gallons of gasoline which was sufficient for a 300 mile range.

Although more than half of the 219-inch overall length of the Chevrolet was used by the cab and engine, the remaining cargo area was relatively free of obstruction. Measuring 81 inches in width and 97.5 inches in length, only the wheel arches interfered with the floor space.

The split windshield assembly extends to the right and left extremes of the truck. Only the outer sections had glass panes and windshield wipers, the middle section being canvas with clear plastic windows.

The truck had 10,000 pounds capacity winch, and that helped limit the angle of approach to 36 degrees. The angle of departure was limited by the nearly normal rear overhang to 34 degrees. Unlike the normal models which used a 235 cubic inch Chevrolet engine, the G-7129 used a GMC 269 cubic incher, which turned out 89 horsepower at 3,000 rpm. The transmission was a Clark 205VO five-speed. A Chevrolet two-speed transfer was used also. 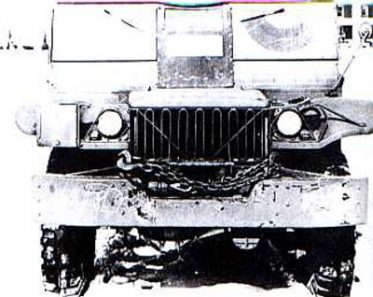