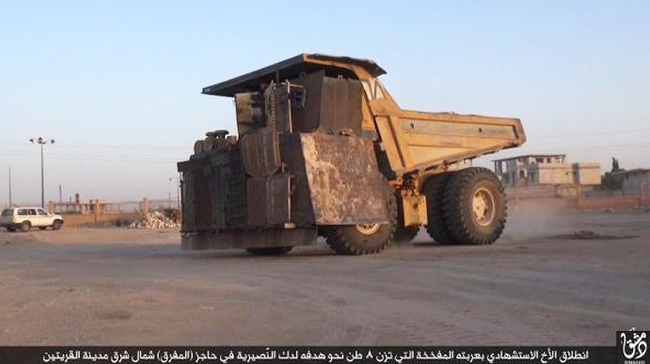 Such a vehicle could plow through obstacles and gunfire that would stop normal trucks, and then the driver, who is on a one-way mission, would detonate the massive improvised explosive device in the truck’s huge flatbed at the right instant.

The target was the T4 airbase, located 60 miles east of the western Syrian city of Homs and about 35 miles west of the recently captured and historically significant city of Palmyra (much of which ISIS is currently destroying).

Strategically, T4 can be be seen as something of a midway point between the Islamic State’s defacto capital of Al Raqqa and the seat of the Assad regime’s power to the southwest, in the capital of Damascus. It is also said to be full of weaponry and material, including combat aircraft, fuel, vehicles and bombs.

In other words, it is probably the juiciest and most strategically significant target within ISIS’s reach. Large truck borne suicide bombs are one of ISIS’s favorite weapons of choice. In places like Ramadi they were used en masse against unorganized Iraqi forces. They would come one after the other, causing chaos and mayhem, each one plowing deeper and deeper into key areas and checkpoints. But the use of such a rare, massive and hardy vehicle on Assad’s forces at T4 shows how important the target is.

The Assad regime is very cognizant of this fact. T4 allows access for Syria’s fledgling government to perform air strikes on ISIS targets to the east and is an outpost for keeping government troops supplied while trying to hold off the Islamic State’s push towards the Mediterranean. As such, it is said to have been heavily fortified with extra troops and material by the regime. Still, this does not guarantee ISIS will not throw everything they have at getting it, as if they can it would largely cut off Assad’s capabilities in the region and could mean a huge arms and material gain for the Islamic State’s already highly extended forces.

In the end, this super-sized SVBIED is another example of ISIS’s unique hybrid form of siege warfare. One that is even more psychological in nature than traditionally surrounding and starving an enemy out of their fortress. Instead, ISIS’s extremely violent tactics are aimed at instilling fear and wearing down the enemy’s will to fight as much as they are about making any real tactical advances.