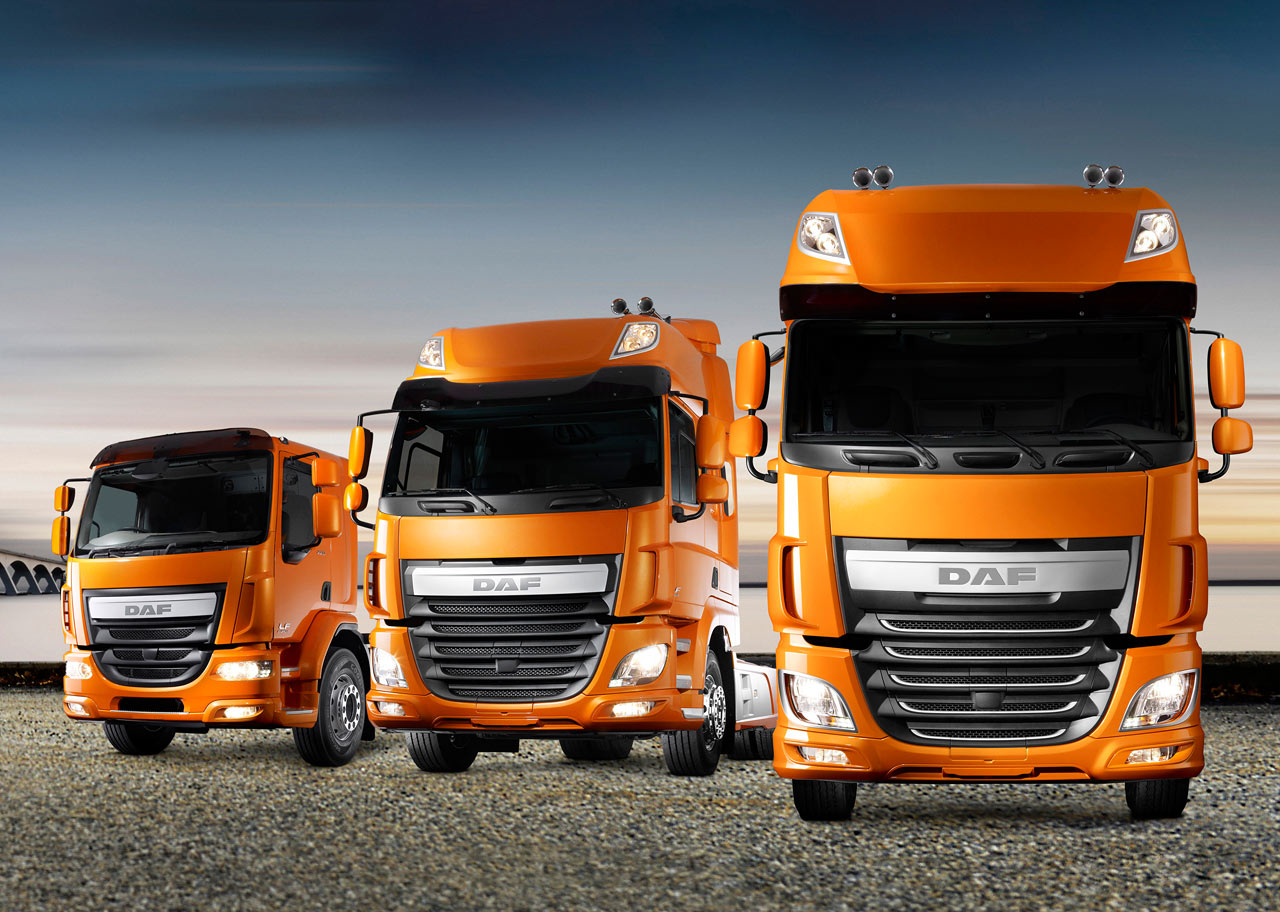 The new Euro 6 LF for distribution transport and the new Euro 6 CF for a wide range of applications feature a new chassis, new drive lines and new interior and exterior designs which emphasise the family resemblance to the new XF.” This is the phrase from the official brochure.

“With the launch of the new LF and CF models, DAF has introduced a complete new range of efficient Euro 6 vehicles”, shared Harrie Schippers, president of DAF Trucks. “The considerable investments involved in the Euro 6 products are an integral part of the company’s strategic growth plan. The Euro 6 project is the largest investment and development programme in DAF’s 85-year history.”

When developing the new LF and CF, DAF was clearly inspired by the qualities of the highly acclaimed Euro 6 XF. The prominent and nicely integrated upper and lower grille create a clear family resemblance, which is enhanced by the centrally positioned chrome panel with DAF logo. For both the Euro 6 LF and the CF the bumper was redesigned. The sophisticated design contributes to maximum engine cooling and optimum aerodynamics. The new LF and CF also feature attractive new headlights. The CF headlights have integrated daytime running lights as standard for excellent visibility during the day, with DAF’s unique LED main lighting available as an option. Also new are the optional cornering lights in the bumper, which shine in the driving direction when manoeuvring and turning, thereby offering increased safety. But the cabins were saved from the previous models.

There are new seats with warm grey trim and a steering wheel from the XF model inside. The dashboard of the new LF has been completely redesigned and the dashboard in the CF has been given a whole new layout, providing perfect access to all controls. Switches have been grouped by function for maximum ease of operation. The new LF and CF have been given the same electronic instrument panel as the XF series, including the stylish aluminium finish of the dials. In the centre of the dashboard sits a 5-inch bright colour display that provides information in 32 languages about all vital vehicle and engine functions, and which also helps the driver to drive as economically as possible.

The new LF and CF will be equipped with Euro 6 PACCAR engines (PX-5, PX-7, MX-11 and MX-13), with ratings of 112 kW (150 hp) to 375 kW (510 hp). The new PACCAR engines have a completely new engine block and are equipped with ultramodern common rail technology, a turbo with variable geometry and a number of advanced controls for maximum efficiency. In order to comply with the stringent Euro 6 emissions requirements while achieving highest fuel efficiency, the LF and CF use exhaust gas recirculation together with SCR technology and a soot filter that is designed for maximum passive regeneration. Fuel consumption of the Euro 6 models is as low as that of the very competitive Euro 5 (ATe) models.

The new Euro 6 LF and CF come with 5, 6, 9 or 12-speed manual transmissions as standard, depending on the model. For the CF, a 16-speed manual gearbox is available as an option, which also goes for the AS Tronic automated transmissions with 6, 12 and 16-speeds. The 12 and 16-speed AS Tronic gearboxes feature a number of specific functions unique to DAF, such as EcoRoll (which allows controlled downhill driving on a disengaged clutch, making maximum use of natural momentum) and Fast Shift for faster switching between upper gears for maximum efficiency.

A new, lighter rear axle is available on the Euro 6 CF for combination weights of up to 44 tonnes and engine torques of up to 2,300 Nm. The use of a Stabilink construction is a new feature. Integrating the anti-roll stabiliser function in the suspension of the rear axle creates optimum stiffness and stability and provides a substantial weight saving. The new fifth wheel mounting plate, the smart way in which the battery boxes have been fitted and the new steering system also result in weight savings. The chassis of the Euro 6 LF has also been fully redesigned for maximum stiffness and excellent driving characteristics, a low kerb weight and ample room for positioning components. The most significant innovation is that the chassis is a single-wall construction, which keeps kerb weight as low as possible — high-quality steel is used for maximum strength. For extra load capability, the 18 and 19-tonne models can be fitted with a new 13-tonne rear axle, which is important in countries where loads exceeding 11.5 tonnes are permitted on the driven axle.

DAF will commence production of the new DAF Euro 6 CF with PACCAR MX-13 engine in June 2013, followed by models equipped with the PACCAR MX-11 engine in the autumn. A version featuring the PACCAR PX-7 engine will be added to the CF range at the start of 2014. The new Euro 6 LF will enter production in the fourth quarter of 2013.