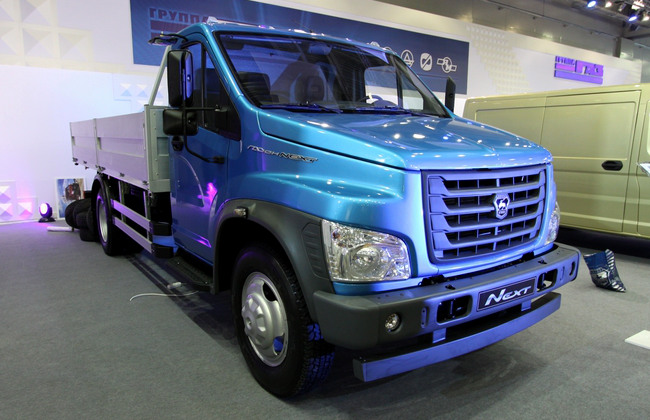 One of the most notable event was the presentation of a new medium-duty trucks from GAZ named “GAZon Next”. It will be the successor of a well-deserved GAZ-3308/3309 model , which received the popular nickname “GAZon”.

This truck has a GVW of 8.7 tonnes and a capacity of 5 tonnes. It received a cab from the new “Gazelle Next” , but with a massive hood and original lights. According to the information provided by the factory the new model has an upgraded front suspension, improved steering and a more modern gearbox with synchromesh on all gears. “GAZon Next” will be equipped with diesel power units: new domestic engine JAMZ -534 ( 4.4 liters , 135 hp) or imported Cummins ISF engine of 3.8 liters and output of 152 hp.

According to the plan, the serial production of the truck will begin in the second half of 2014 in two versions – with standard and extended platform. Later lineup should be supplemented by versions with twin cab and all-wheel drive modifications.

International Truck and Van of the Year 2014
Comtrans 2013: Cabover Ural trucks will be updated by 2014