They would take everything they would need with them to the grave, including servants, gold and even pets. This car is a bit like that, but without the death and gold. Yes, the Rolls Royce Phantom has been turned into an all-mighty luxury… hearse. What’s more, the regular car was already a long boat on wheels, but this is on par with limos since it’s been stretched. The Phantom (fitting name isn’t it?) was modified by Biemme Special Cars and will be officially unveiled at the Tan Expo funeral home show in Bologna, Italy. The 6.75-liter V12 engine, self-leveling suspension and… suicide doors have all been kept. How much will it cost? Biemme hasn’t handed out a specific figure just yet beyond saying the vehicle will likely fetch more than €500,000. 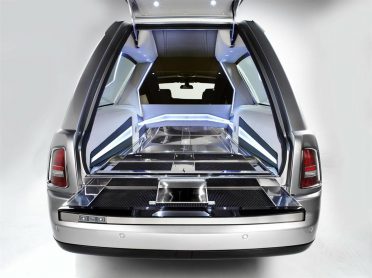