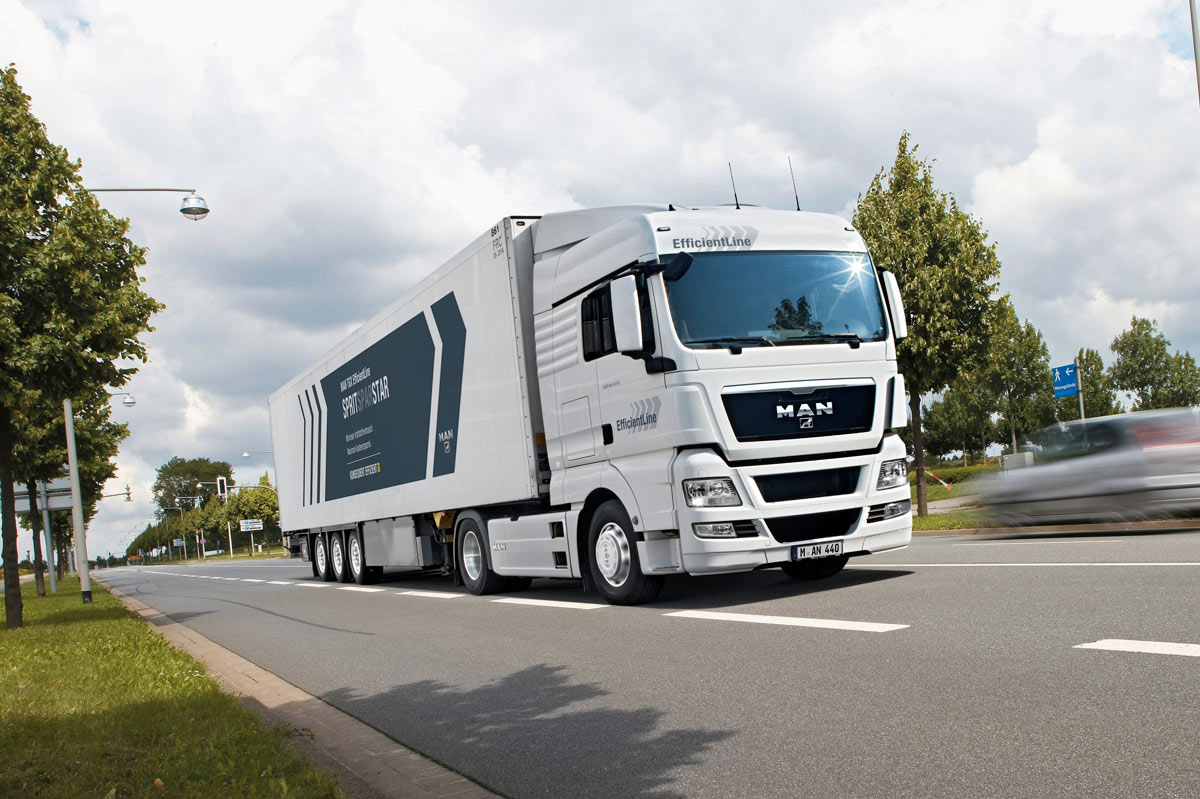 Given the high annual mileages of trucks in long-haul transport with an average of 150,000 kilometres, a saving of three litres fuel means nearly €20,000 for the operator, based on the current average price of €1.11 for a litre of diesel in Europe and a four-year period of use.

Because drag is the primary cause of fuel consumption in long-haul transport, the TGX EfficientLine only comes without fittings such as sun visors or compressed-air horns on its standard XLX cab. This saves up to 0.3 litres of diesel per 100 kilometres. At the same time, standard equipment includes aerodynamic side cladding, which reduces consumption by another 0.4 litres.

The TGX EfficientLine stands for a further consequence of the laws of aerodynamics: if a vehicle travels along a level road at 85 km/h instead of 89 km/h, it saves an enormous amount of fuel without losing a noticeable amount of time. Purely mathematically it would be a little over nine minutes on a route of 300 kilometres, but in everyday traffic conditions it would very probably be less.

For this reason the top speed of the TGX EfficientLine is electronically restricted to 85 km/h. With this measure alone, drivers in field tests were able to reduce consumption by 0.6 to 2.2 litres. The MAN TGX EfficientLine can be ordered with engines delivering 400, 440 and 480 hp, whose power is transmitted through direct-drive gearboxes. In combination with hypoid single axles this keeps friction losses in the power train at a minimum. Direct drive in top gear enables a saving in fuel consumption of around two percent relative to the overdrive version when the vehicle is operated mainly on motorways.

The optimised gear-change strategy of the MAN TipMatic® Fleet in the TGX EfficientLine changes to the most economical gear at exactly the right moment and provides maximum torque whenever it’s needed. The average saving achievable in long-haul transport with the MAN TipMatic® is around 4.5 percent – that’s a potential saving for operators of €2,780. The MAN TGX EfficientLine is fitted with a new Intarder generation. The round 25 percent lower friction losses when idling reduce fuel consumption by approximately 0.15 litres per 100 km.

MAN’s air-pressure management (APM) decreases the loss incurred by the TGX EfficientLine when air is compressed. A multi-disc clutch deactivates the compressor completely when the cut-off pressure has been reached in the air tanks. The rolling resistance of the tyres is decisive for economical operation: on a six-wheeler semitrailer tractor, tyre pressure that is too low by a mere 2 bar will increase fuel consumption by 1.2 l/100 km.

The TGX EfficientLine is equipped with particularly light front- and rear-axle suspension, together saving around 80 kg: the re-engineered front-axle suspension with its single-leaf spring is not only light, it also improves the handling. It is not for nothing that MAN is known for having the lightest Euro 5 tractor on the market: no current Euro 5 tractor with a comparably sized cab is lighter than the TGX 18.400 with XLX cab.