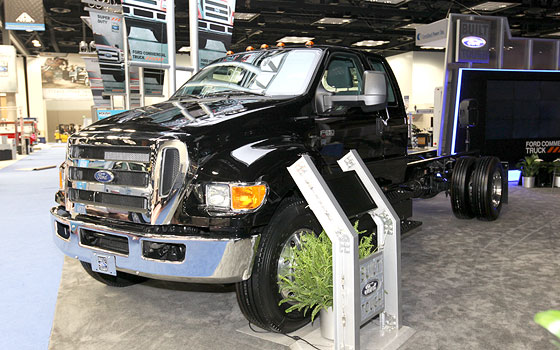 Now Ford F-650 truck is offered with a Cummins diesel engine. But like other diesel engines, prices for the oil burner have gone up as emissions regulations for diesels have gotten tougher. In Classes 4 to 7 of American classification, prices have grew up 36 percent on average.

“With diesel prices outstripping gasoline by more than 10 cents a gallon in many parts of the country, the timing is perfect for a gasoline powertrain in a medium-duty truck,” said Todd Kaufman, Ford’s F-Series chassis cab marketing manager.

The 6.8 gasoline engine has a diesel-like 362 hp and 457 pounds-feet of torque. These engine will be mated with the all-new 6R140 six-speed gearbox with double overdrive gears and available power takeoff, instead of 5R110 five-speed automatic transmission of diesel-powered version. The cost of powertrain of gasoline version is $8,000 less than a comparable diesel.

Though diesel engines are generally up to 30 percent more fuel efficient than gasoline engines, Ford hopes with just the right powertrain calibrations to close that gap to as low as 10 percent with the 6.8-liter/6R140 combo, according to Kaufman. A compressed-natural-gas version will also be available. The Ford F-650 with the 6.8 V-10 gasoline engine will have a GVW rating of 30,000 pounds and a GCVW rating of 33,000 pounds. Ford will start taking orders for the gasoline version by the third quarter of 2011. It will be available in two chassis configurations: Pro-Loader with 19.5-inch wheels or dock height with 22-inch wheels. The F-650 and F-750 will also receive an all-new interior shared with the Ford F-Series Super Duty pickups.