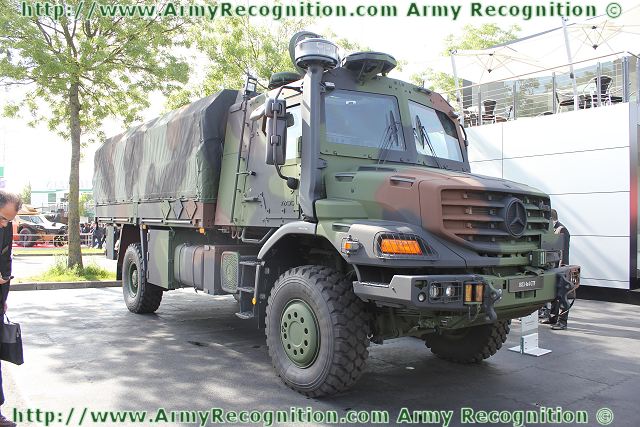 For the five-tonne payload class the Zetros 4×4 GLF from Mercedes-Benz was the only non-cab-over-engine vehicle selected in the competition. Following the issuing of the order in May 2012, production delivery will start at the end of the year. All the 110 vehicles ordered will be at the unit’s disposal in mid-2014. This short reaction time between the placing of the order and delivery is only possible because Mercedes-Benz uses the assemblies – which have been tried-and-tested in applications many times over – from its current volume production.

The protected cab behind the front axle ensures the required protection against fire, shrapnel, mines and IEDs and offers the crew two or three fully fledged seats, plus stowage space for their personal kit and for communication equipment. As part of the standard specification the cab is equipped with powerful ABC protective ventilation and air conditioning.

The drive system is taken care of by the 6-cylinder in-line diesel engine OM 926 LA with exhaust gas emissions in accordance with European emissions standard III or European emissions standard V, and which develops its output of 240 kW and a maximum torque of 1300 Nm over a wide engine speed range and which can also be operated with poor-quality service fluids such as those found in the vehicles’ conditions of application. Traction is transferred to the two permanently driven axles without interruptions via a fully automatic Allison 3000 SP transmission with six forward gears.