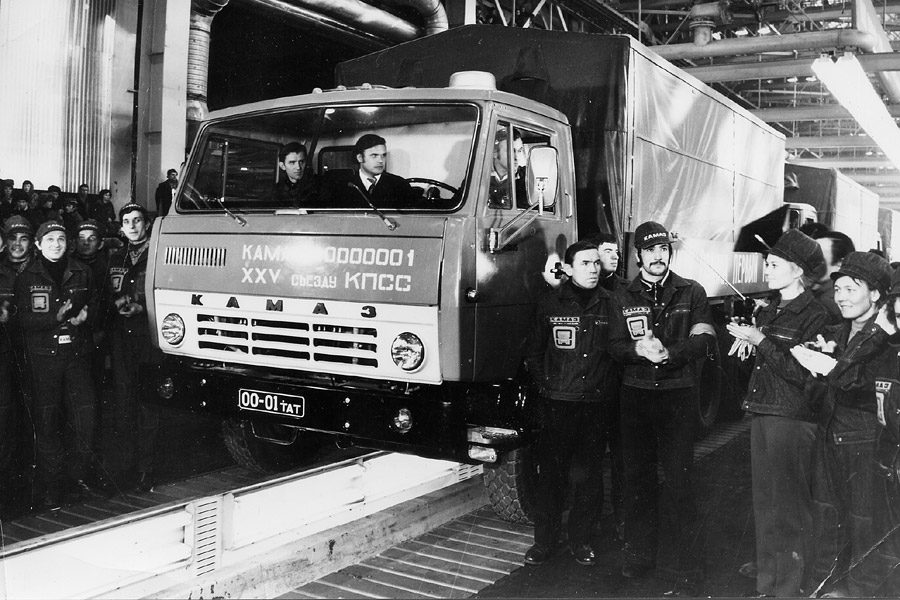 By the end of 1976, 5 thousand heavy-duty trucks of 4 models had been assembled, and some of them had the same number – #1. Many drivers arrived in Naberezhnye Chelny to take their long-awaited trucks and asked to draw this number on bonnets of their new vehicles.

In the second year of mass production of KAMAZ vehicles (1978), the plant became a paying concern. A year before (in 1977), KAMAZ began exporting its vehicles to the far abroad. 5 years passed, and when its second line was launched, the plant mastered production of 8 models, including, for instance, the KAMAZ-5410 truck tractor, the KAMAZ-5511 dump truck, and the first all-wheel-drive vehicle branded KAMAZ-4310. Almost 250 thousand units were added to the fleet of KAMAZ trucks in the USSR and importing countries for these years.

In 1981-87 production and creative power advanced with seven-league strides at KAMAZ. Every year new models were developed, designed and produced. Three basic models of a “Mustang” family of military vehicles were created, now they are used by the RF Ministry of Defense. Many advanced and breakthrough ideas of KAMAZ designers of those years couldn’t be realized then because there were no appropriate technical feasibilities in the country, and some of them couldn’t be implemented even for political reasons. Those ideas were realized at the beginning of the new century – with KAMAZ’s improved and developed technical capacities and know-how. During the passed 35 years, three generations of KAMAZ designers headed by Vladimir Barun, Ramil Azamatov, and Danis Valeev, have developed over 1,500 models, modifications, and kits in all.

Today’s KAMAZ trucks radically differ from those first vehicles which came off the conveyor in the 70-ies. They are perfect, of high quality, powerful and reliable, of higher carrying capacity and with a longer operation life. The best components by many world-known companies are used in their construction. Vehicles of model range 2010 are called “real products of new quality”. They will be produced till the end of 2013. The two-millionth KAMAZ will be one of the members of this family. According to current prognoses and production plans, it will be manufactured at the end of the current year or at the beginning of the next year.