In 1950, all diesel trucks of Clansman, Chieftain and Clydesdale series received a new look of the front part with the curved front panel and recessed headlights. Producing of all models continued under the same indexation, but there are many new models.

FT25/FT27. 1954-1957. In 1953 the company presented the vertical engined Claymore FT25 and FT27 3 and 4 tonners, which replaced the FT21 and FT23 petrol engined models. These were the first completely new models introduced under Leyland ownership, and the Leyland influence was evident in the specification which included the new Albion EN218 engine, and four cylinder version of the Leyland 0.350, Leyland clutch and Leyland 4 speed gearbox. Otherwise the rest of the chassis followed the same lines as the petrol-engined models which they replaced, but adopted the curved dash from the Chieftain.

FT37A. 1952-1953. In 1952 certain improvements were introduced to the Chieftain range. These were indicated by the ‘A’ suffix, and the more important of these were a larger wormwheel assembly on the rear wheels, heavier springs, improved braking, flexibly mounted radiator tubes, improved fuel filtration and minor alterations to the wheelbase.

FT111. 1952-1959. The Albion Chieftain FT111TR tractor unit of 1952 had a specially designed frame to take a Scammell coupling,and had an Eaton 2 speed rear axle as standard. The Chieftain-Scammell tractors, and in particular later models with the 6 speed overdrive gearbox, earned a reputation as reliable mile eaters on long distance trunk haulage. In 1956 the combination of Albion 4 cylinder oil engine, Albion 5 speed gearbox and Eaton 2 speed axle was used in an ultra low weight experimental vehicle featuring an aluminum frame, platform and cab. In 1957 the company presented model FT111KTR with EN287 engine.

Autolifts cab option. 1953-1959. In 1953 a factory cab option became available on the Chieftain, Clydesdale, and vertical engined Claymore, three models which shared the same curved dash and radiator style. The pressed steel cab was made by Autolifts and Engineering Company Ltd. of Blackburn, who were also well known for their tipping gear and bodies.

PF series. 1955-1959. Leyland-engined Reivers and Clydesdale were given the new code letters PF. Although the Albion five speed gearbox remained standard, 1956 also saw the introduction of the Albion six speed gearbox for all models in the FT/PF range, which increased top speed by 30%, and also effected a useful saving in fuel.

Albion Claymore FT25N From the Albion of Scotstoun book

Albion Claymore FT27N From the Albion of Scotstoun book

Albion Chieftain FT107N From the Albion of Scotstoun book

Albion Chieftain FT111TR From the Albion of Scotstoun book 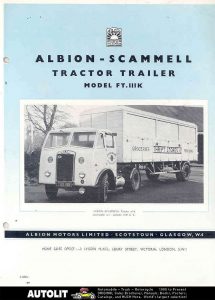