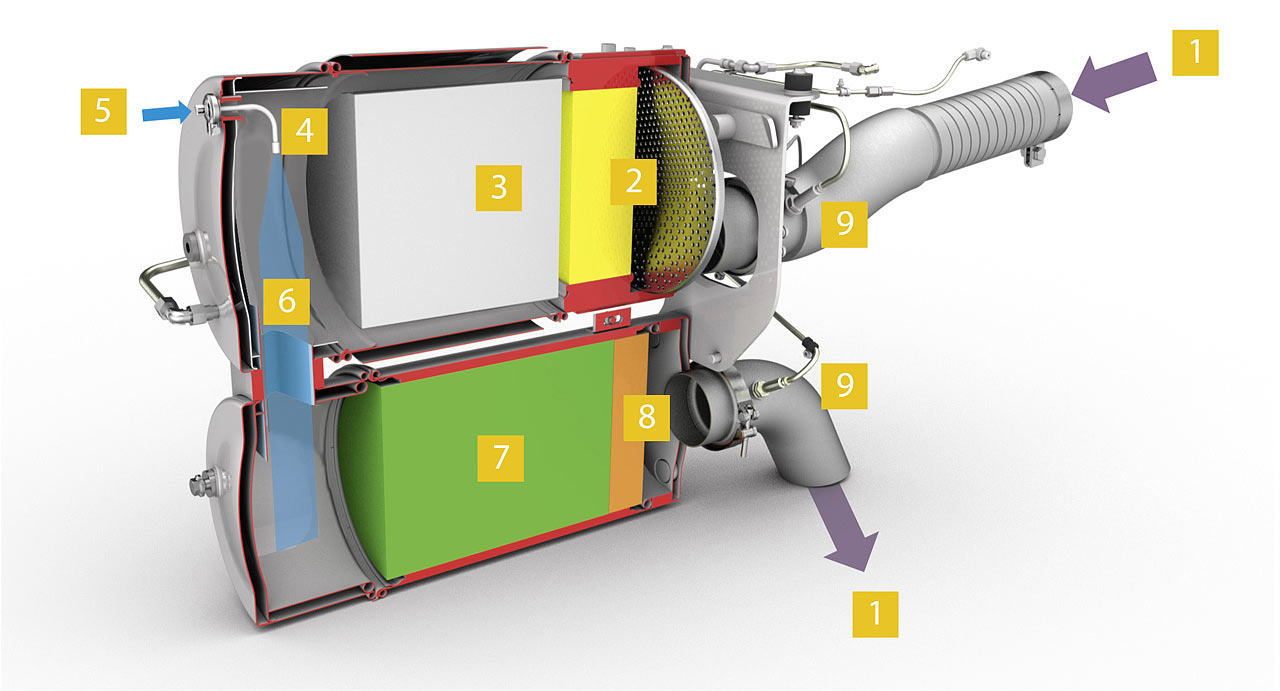 MAN has already been using the key technologies necessary for Euro VI – EGR (exhaust-gas recirculation), diesel particulate filter and SCR (Selective Catalytic Reduction) – in commercial vehicles with great success for several years. SCR technology, for example, has been installed as standard in trucks since 2005. MAN’s particulate filter technology CRTec has been in series operation since as far back as the year 2002.

The central components for Euro VI are, on the engine side, common-rail- injection, cooled and controlled exhaust-gas recirculation and two-stage turbocharging. These are followed by exhaust-gas aftertreatment by an SCR system with integrated oxidation catalytic converter plus CRT filter (Continuously Regenerating Trap). Electronic sensors permanently monitor the absorption capacity of the particulate filter. Also integrated into the SCRT system are the sensors monitoring NOx. Because the Euro VI standard makes the use of a diesel particulate filter practically unavoidable, the developers had more latitude in optimising combustion design and fuel consumption. Common-rail injection functions at pressures of up to 1,800 bar. This system has been standard at MAN since 2002 and the Euro V, EEV and Euro VI engines are already equipped with third-generation CR systems.

Euro VI engines with outputs of 162 kW / 220 hp and up employ a combination of two-stage turbocharging with primary cooling and intercooling of the boost air. The two turbochargers have been combined to form a single compact turbocharger module. Each stage is equipped with a waste gate. This makes it possible to control boost pressure and distribution between the two stages so that the energy of the exhaust gas is used most effectively. The Euro VI engines in the TGL series delivering 110 kW / 150 hp and 132 kW / 180 hp employ single-stage turbocharging at the same high level of efficiency. The basic design of the engine and stroke and bore have not changed. Cooled exhaust-gas recirculation (EGR) has been in series production at MAN since 2000. The recirculation of cooled exhaust gases makes a low peak combustion temperature possible. As a result, fewer nitrogen oxides are formed. Euro VI utilises electronically-controlled EGR, which ensures considerably improved control performance. The newly developed SCRT system used for exhaust-gas aftertreatment combines an oxidation catalytic converter, a closed, electronically controlled surface particulate filter and an SCR catalytic converter with AdBlue® injection.

In formulating its regeneration strategy for the diesel particulate filter, MAN paid special attention to maximum operational reliability. Regeneration of the particulate filter takes place automatically during normal operation without any action having to be taken by the driver. Regeneration in the TGX, TGS and coach is designed to be carried out by a passive SCRT system. In normal driving operation, the system functions at exhaust-gas temperatures at which regeneration permanently takes place. Special regeneration phases or supplementary injection of fuel to raise the temperature are not necessary during normal operation. If the vehicle spends a lot of time idling or is operated in short-distance transport, the system has other modes that enable it to perform regeneration while on the go. Whenever necessary, the “Soft Active” mode uses a secondary-injection function of the common-rail system to raise the temperature of the exhaust gas. The engine variants installed in the TGL and TGM series are fitted as standard with active SCRT systems for regeneration of the diesel particulate filter and are thus optimally equipped to meet the demands of distribution transport.

With the advent of Euro VI, SCR is for the first time being installed in TGL and TGM vehicles, where it supplements the proven EGR technology. The basis is formed by the Euro V / EEV engines, which have been produced in series since 2009. EGR with demand-controlled recirculation rate and the common-rail system with 1,800 bar injection pressure are the backbone of the Euro VI system in the engine itself. The power spectrum ranges from 110 kW / 150 hp to 251 kW / 341 hp. 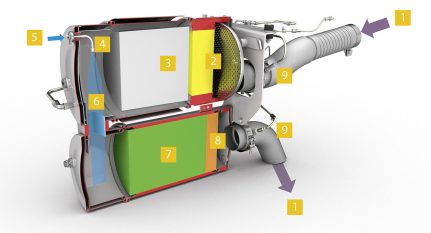