MR5 / MR7. 1954-1957. Introduced in 1954 was the underfloor engined Claymore MR5 and MR7 for loads of 3 and 4 tons. Fitted with the horizontal EN219 3.83 litre diesel engine, it shared all the major components of the vertical EN218 from the FT25/27, except that it had a different sump casting and repositioned ancillaries. Taking full advantage of the underfloor configuration, the extended frame dropped down ahead of the front axle allowing a three man cab to be mounted at a low position for particularly easy access.

Freedom from engine noise, fumes and heat were other selling points, and the short wheelbase produced a small turning circle ideal for local deliveries in tight loading bays. An Albion 4 speed constant mesh gearbox was fitted with synchromesh on third and top, driving to the usual overhead worm axle. Only tyre equipment differentiated the MR5 and the MR7, although the MR7 was available in a longer wheelbase.

MLH3. 1955-1957. In 1955 another underfloor engined chassis was introduced, the short lived MLH3 ‘Cairn’ for payloads of 30 to 35 cwts. The mechanical specification was similar to that of the Claymore, except that lighter axles with 6 stud wheels were fitted, the rear axle was an Albion spiral bevel unit and not the usual worm drive arrangement. 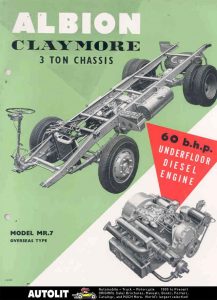