Chevrolet’s Step-Van models were keeping up their popularity, and were seen just everywhere. The vehicles were sold either as finished trucks, called Step-Vans, or in chassis form, where they were called Forward Control Chassis.

In 1968 the Step-Van King received a new face in a style of the medium-duty trucks. The Step-Van King truck could be built on the P20 3/4-ton chassis with 125 or 133-inch wheelbase, or on the P30 1-ton model with the same wheelbases. There was also P40 model, which was available only as a Forward Control Chassis. The body length for the Step-King was 10 to 14 feet. 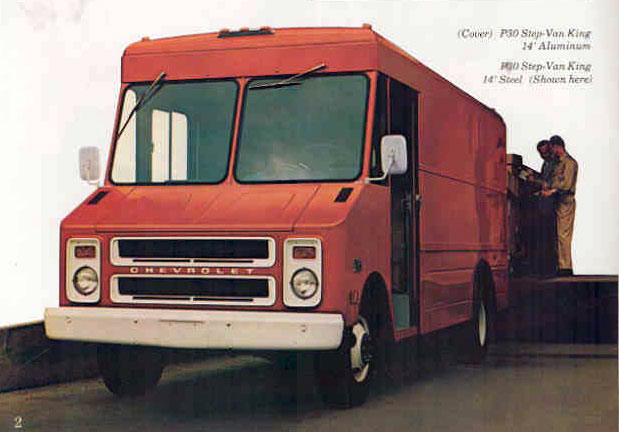 V8 for the PE20 and PE30 models, 3-speed fully synchronized transmission for PS20 and PE20; and 4-speed – for the PS30, PE30 and PT30. Full front wheelhousings with one-piece steel construction ward off road splash, reduced rusting.

In 1969, the company presented its new light weight aluminum Step-Van King model. It was identical in all case aspects to the regular series of Step-Van Kings, except that the body material was aluminum instead of steel.

Designed for heavier loads in the high cube business, this light weight body material dramatically increased the payload part of the total weight. Not only that, but body corrosion became a thing of the past. Aluminum Step-Van Kings were available in a total of thirteen models in three wheelbases, five gasoline and one diesel engine. 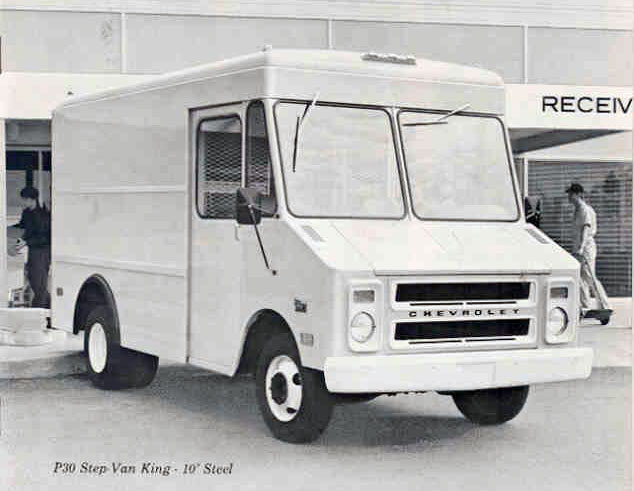 In middle 80s the new body sizes were presented with maximum volume up to 955 cu. ft. Step-Vans were extremely popular and produced for 25 years. This generation was the last, when Chevrolet made bodies for such vehicles. After begins of 90s, the company produced only Forward Control Chassis for aftermaket body building companies.