The 1977 became the year of introducing the heaviest Chevrolet’s model – the Bison, brother of GMC General, debuted the same year. The 3-axle model was available in two basic versions: a 108-in. BBC model N90, developed mainly for construction and off-road use, and 116-in. model M90, mainly for highway use. Bison’s cab was built of high-strength aluminum alloys.

Lightweight fiberglass-reinforced sheet-molded hood was also used. Customer could choose steel or aluminum frames and one of many wheel types. The Bison model was available with a sleeper cab option.

Several engine options were offered – Detroit Diesel Series 71 and 92; and Cummins NTC-290, NTC-350 and NTC-400 with an output from 219 to 412 hp. New cooling system was designed especially for the Bison model and included 1400-sq.-in. frontal area radiator. Series nomenclature has been changed for 1979. N90 trucks and M90 trucks became N9E and N9F trucks.

During the last year of production, in 1980, Bisons were equipped with Caterpillar 3406 diesel engines. The production of Chevrolet Bison was stopped in 1980, but GMC General was produced until 1987. 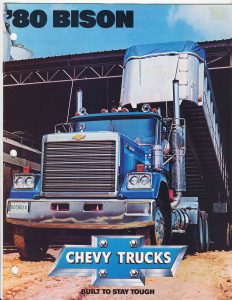