Mr. W.H. Albee’s Rolligon principle fascinated all elements of the defense industry. The Air Force experimented with it for use on immense missile carriers, while the Navy experimented with a Jeep-based version. The Army’s interests lay primarily in moving cargo over boggy or snowy terrain, and several versions were tried including a three-bagger. In an effort to use standardized components as the basis for applying the Rolligon principle, the Transportation Corps asked the Ordnance Corps to develop a 6×6 version based on an M34 6×6.

The vehicle was assembled by a firm called Wetmore, Hodges and Associates, and was tested extensively in Hope Valley, California, in February and March, 1954. The Rolligon vehicle used a drive roller which pressed down on the top of the bag to provide locomotion, but there was no positive drive between the two components. When an axle-driven version was designed using Terra-Tires, the development of the roller-driven Rolligons ceased. 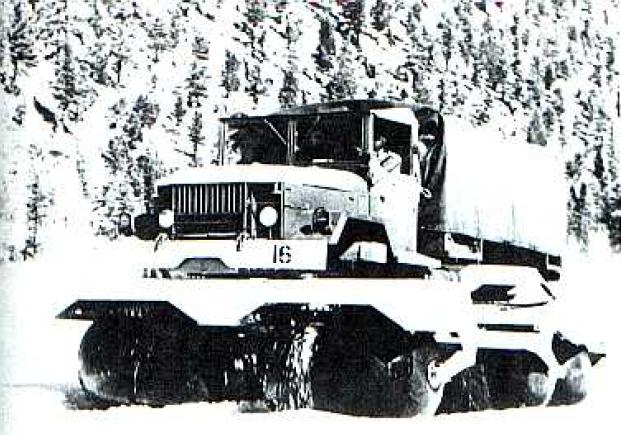